← more from
Astral Editions
Get fresh music recommendations delivered to your inbox every Friday.
We've updated our Terms of Use. You can review the changes here. 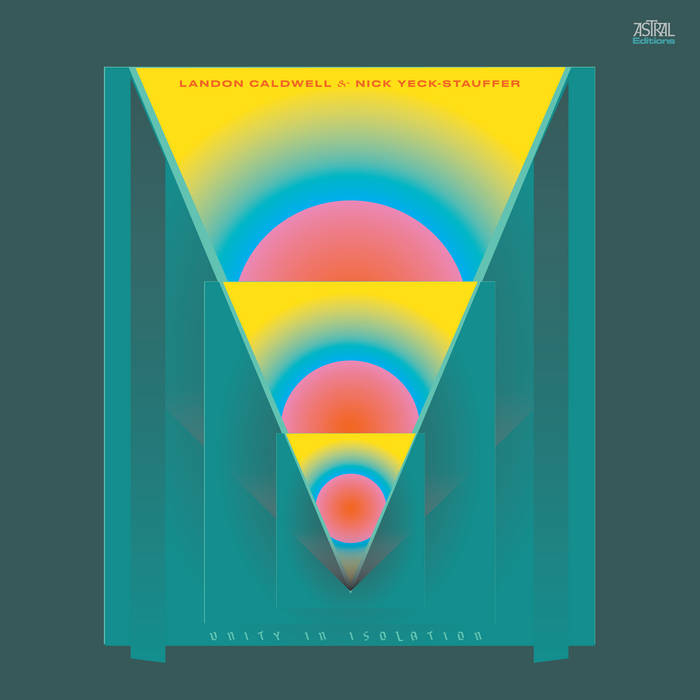 jeffbbz Some vibes of Vangelis meets Arve Henriksen but these folks have crafted a gentle masterpiece that is all their own.

A Man Lost In Time

The World you can't leave behind

"Crazy Doberman were holed up at A-Space in Indianapolis for their Illusory Expansion sessions, an amorphous span of organic and guided jams punctuated by smoke breaks, meals, and sleep. Players came in and went, sometimes in the middle of jams. I had never met Nick before.

Most everyone went outside to smoke and give their ears a rest. I was sitting at my electric piano playing a little piece I had been toying with for a while. I had just quit smoking and couldn’t leave myself to be tempted. Nick grabbed his trumpet and started playing along, wonderful little lines punctuating the space between my playing.

We clicked/synced and went to an immediate zone. We jammed the entire duration of the smoke break and as others filtered back in the piece fell away and the hive-mind manifest that is Crazy Doberman returned.
For a couple years there was a lot of “man we gotta record that.” Then out of desperation for breaking isolation during the beginning of Covid, I reached out and we did it."
- Landon Caldwell, December 2020

"The sessions for what would become Illusory Expansion are hard to imagine now.

16 people passing in and out of a disused small strip mall storefront, in and out of various.... perceptual states - free playing and vibe sussing. Cast determined largely by impulse/instinct/availability, heroes and friends showing last minute, sharing smokes/drinks/instruments, all embraces and laughter. Particle blasting without a care.

The set up was pretty laissez faire, everyone wheeling and trading set-ups, implements. When I got into the studio late night, I noted a real curious black slat of keyboard- no electricity flowing to the keys, instead snaking out from a smart variety of pedals and effects. The keys itself tho, a poetically voltage free voice. Having a certain affinity for instrumentation that is played with the body, I tentatively picked a little arpeggio, feeling the tiny hammers hit, notes flowing through the attached system of effect to make a watery, almost Rhodes like voice. Beautiful.

The sessions had those aforementioned moments of lysergic musical chairs that afforded these kinds of investigations, all of us moving from instrument to instrument and sitting on the floor ringing the little bells when we’d had too much. The cast of characters slipped in and out focus with a certain anonomie but we noted each other’s set ups and sounds with fascination and excitement. As I landed on the bench and played those strange keys again, I developed a curiosity as to who put together the notable setup. Little hammers in the heavens, ringing celestial, Chakric head cleaners.

The cast ebbed and flowed throughout the days, and at one point everyone was gone out to smoke- I stayed put, wary of bumming too many smokes off Zeno in a single chapter of my life. Fiddle with the trumpet, blow the spit out, oil the valves, deepened the cybernetic continuation between body and horn. Sounds crazy like that but normal stuff. Then I peep, more quietly present, our lean owner of that curious Pianet, checking this and that.

Sometimes you can tell a little about a person by their rig, and Landon’s deep pupils peering out from a kind face confirmed what information was already there: an organic intuitive sensibility/sensitivity gazing out to the cosmos, mapping stars. Warmest smile as I chatted him up, both of us spilling compliments as you do, but stamping them down as sincere. A feeling of meeting a new friend pervaded, almost child like on my end. He explained how the Hohner Pianet worked, and how he coaxed such deep textures from its power-free guts. He sat down and out came a little stream, into a river. Rain in curved air.

My horn was at my lips and I let Landon take me downstream, and we played.

It was one of those almost perfect, fleeting sort of exchanges that happens in the in between moments that one happily resigns to the mythic; a castle in the sand that we built for only a few moments or minutes- then happily chattering like birds. Yes, we both loved the Don Cherry Terry Riley takes from Koln, yes we had to hang out again, yes we needed to record. These sorts of things get said, and rarely are they meant as much as we both did, and even more rarely is it possible to follow through on all this enthusiasm for an unknown tomorrow.

But sometimes it happens!

As bittersweet as it is to reflect on those sessions in 2020 (all of us sharing all that air), our current moment has afforded a certain kind of 21st century collaboration becoming normal- well, crucial. And at this kind of digital exchange Landon has proven himself something of a maestro.

Like many I found myself struggling with existential issues as the pandemic bore down, and then into the inbox comes Landon bounding with a life raft in C, or was it G: an unadorned slice of pure transcendent synth. It needs a horn he says. So I played the horn.

Thanks to doberman crew and largest love to Landon space-eyes himself for coming through, and cutting me in. We've got more stories to tell."

Hopefully by now you've become familiar with Landon Caldwell's work whether it's his Caldwell/Tester duo (see Little Flower released early 2020 on Astral Spirits), his solo work (see Unity released on Atlantic Rhythms in 2020) or even his own label he runs with Mark Tester - Medium Sound. I truly can't say enough about how amazing this Indianapolis based musician is. Chicago-based trumpeter Nick Yeck-Stauffer (Signal Decay, Crazy Doberman) who might not have a long CV yet, but will likely be a name to watch in the not too distant future.

Unity in Isolation sounds like an updated and modern version of the Codona albums with a dash of Philip Glass minimalism added in. There is a heavy Don Cherry vibe, but it comes unexpectedly from the electric piano and organ playing of Caldwell, while Yeck-Stauffer channels his inner Rob Mazurek throughout. There are many who have tried to emulate the Codona/Don Cherry style but to these ears nobody has made it sound so modern and fresh as Caldwell & Yeck-Stauffer do here. Bold words indeed but give a listen and take it in. The album is less than 40 minutes yet I want it to go on forever. One of the most enveloping and inviting records I've heard in some time.

Bandcamp Daily  your guide to the world of Bandcamp

Semiratruth joins the show to discuss their latest release, "loading..".